“Look! They only have to work for a few months each year – the rest of the time they just relax and get fat…” Dorjee grumbled as we were overtaken by an SUV with blacked-out windows. It was a freezing November morning, and our little convoy was rolling out of Nagchu in northern Tibet.

Dorjee had guessed that the car was driven by Tibet’s noveau riche – the brokers who have benefitted from the surge in prices for caterpillar fungus. This traditional remedy, Cordyceps sinensis, has changed the economies of remote mountain towns across the region, as I witnessed when I stumbled across Hezuo’s caterpillar fungus market last May. 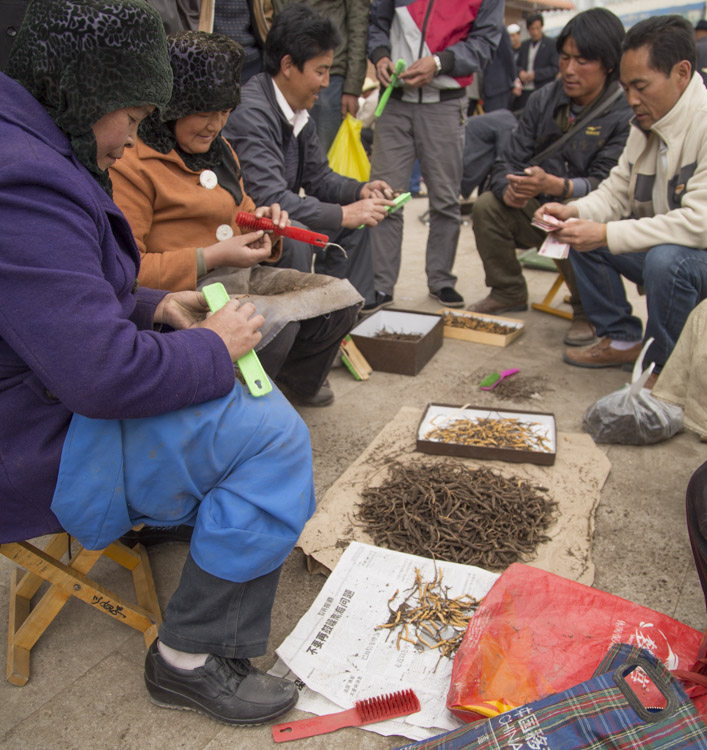 Now, Cairang Duojie, a Tibetan undergraduate at Duke University in the US, has produced a fascinating short film that looks at the lives of the people who hunt for the fungus each spring. His work, the wonderfully titled “Golden Worm”, highlights the economic situation that pushes many to go searching for caterpillar fungus, despite a dramatic decline in the annual haul. If you have 12 minutes and 42 seconds to spare, watch it:

In my previous post on the subject, I was equivocal about the impact of the surge in caterpillar fungus prices. But after doing some more research recently and watching this film, I’ve had a rethink. The short-term impact on humans has been, in balance, positive. A few (like the putative SUV owner in Nagchu) have been significantly enriched, and many more have seen a small but important improvement in their livelihoods (like the people in “Golden Worm”).

However, the long-term outlook is far less rosy. Due to the increase in prices, many fungi are collected when they’re undersized, before they have released their spores. This means that numbers are dropping, just as human consumption is rising, this over-harvesting effectively making Cordyceps sinensis a finite resource. It will become extinct at some point, unless something changes, soon.

The way that the fungi are gathered also damages the slow-growing grasslands by disturbing plants’ root systems. This makes grazing difficult for yaks and sheep both now and for years to come, meaning that life will eventually be tougher than ever as local people need to fall back on herding when these odd little fungi have finally disappeared from the hillsides.

As we see with environmental issues worldwide, most people choose to fulfill their short-term needs at the expense of long-term factors like environmental conservation – and put in their position I would do the same. But I really hope that through the development of this region’s nascent eco-tourism business, local people will be able to find some value in their beautiful natural environment and start to protect it for it’s own worth.