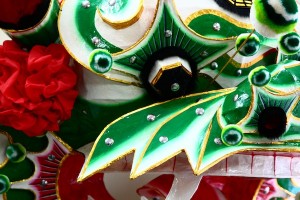 On a recent visit to Cheung Chau Island in Hong Kong, we were lucky to catch the opening party for a friend’s shop. The friend, Ah Kei, makes papier mâché heads for the lions and qilin used in traditional Chinese processions. The picture on this post shows one of his beautiful qilin designs.*

The video shows our journey to Cheung Chau, the qilin procession through the village and the lion dance outside his shop. Once the dancing and music was finished, food was provided for everyone – including passersby – a wonderful (and colourful) way to celebrate a new venture…

* What’s a qilin, you ask? It’s a mythical creature, sometimes called the ‘Chinese Unicorn’. The qilin takes on different appearances in different regions of China, but it is everywhere associated with prosperity and serenity (or 瑞 ruì, for any Chinese speakers out there). In 1415 the explorer Zheng He returned to the imperial court with giraffe from his long voyage to East Africa. The giraffe were called qilin by the court and the Emperor proclaimed them magical creatures. Today,  papier mâché qilin and lions are used to ensure the success of new businesses by scaring away bad luck and ill omens.

P.S. This video is a 100% Little Yak production – I recorded and mixed the sound, took the photos and put it all together for your viewing pleasure. I’m pretty happy with the results – what do you think?

One response to “Hong Kong Scenes: A Lion comes to Cheung Chau!”