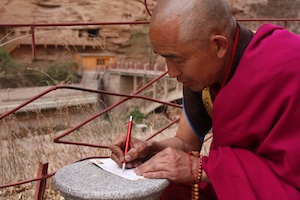 Postcard from a Monk © Jo James

Studying Chinese requires that you make a few decisions upfront. Do you learn Mandarin or another dialect? Learn the characters or stick with pinyin? Traditional or simplified characters? Go to China to study or can you learn at home? If you go to China, do you head to a major city, or a secondary town? Pay for a formal course or hire a tutor? Find a Chinese boyfriend/girlfriend and be done with it? Decisions, decisions… Here’s my two cents’ on the whole thing:

Learn Mandarin first
Mandarin is the most systematic Chinese language to learn. You’re helped along by pinyin (a straightforward system of writing Chinese characters in the Latin alphabet) and a relatively simple tonal structure (just four tones, compared to Cantonese’s nine), but the main reason is that it’s a lingua franca across the Chinese world and understood by millions of people. If you get fancy and decide that you fancy learning Shanghainese or something afterwards then having a foundation in Mandarin will only help you to learn more quickly.

学好汉字 (Learn your characters)
In the early part of the twentieth century, there was a debate amongst Chinese intellectuals about whether characters should be done away with and replaced with pinyin. The argument was effectively settled by poet Yuen Ren Chao, who published a poem called “The Story of Mr Shi Eating Lions” – the Mandarin title in pinyin being ‘Shī Shì shí shī shǐ’ – every word in the poem is pronounced ‘shi’ in one of the four tones. Without understanding the characters, how are you going to differentiate shī (狮, lion) and shī (诗, poem)? Or, for that matter, the 149 characters that are pronounced yì?

Chinese is a language of characters, not letters. If you ignore them you’ll limit your own learning and miss out on one of the most interesting elements of Chinese culture. Plus you’ll never know which toilet to go into, 男 or 女?

Traditional vs. simplified
In China, literacy has historically been an elite skill – only the wealthy had time to learn how to read and write. In the 1950s and 60s, in an effort to increase literacy rates, the mainland government simplified many characters. Today, simplified characters are used inside China and Singapore, while Hong Kong, Taiwan and many overseas Chinese communities still use the traditional system.

The Question of How
Once you’ve decided all of the above, you’re left with the practicalities. Obviously you have to take your own situation and constraints into account, but the people I’ve offered advice to fall into two camps:

I want to have fun, and learn a bit of Chinese ($$$)
Then head to Beijing or Shanghai, enroll in a language school (BLCU for maximum fun times, Peking University/Tsinghua/Fudan if you want to learn something and have a nice name on your CV). You’ll have an awesome time, and maybe learn something as well. Beware of strict requirements on attendance records at all schools, however – party too hard and you’ll get kicked out.

I want to learn lots of Chinese quickly and have a character-building experience ($)
Go to a smaller city, preferably somewhere where the pronunciation is standard (north-east China has the most neutral accent), hire a tutor or enroll in a small language school, try to get a Chinese boyfriend or girlfriend. It will probably be tough, at least to start with, but your Chinese will improve quicker than Liu Xiang, and you’ll look back on the experience with fondness in years to come.

The best piece of advice I can offer is to find a way of learning where you can enjoy the process. Regardless of how you go about it, Mandarin is not an easy language to learn and it might take years to get to a level where you feel happy chatting away. You’ll be more likely to give up if you put yourself through a punishing regime of memorizing characters and completing boring lessons that you don’t really enjoy. Find a way to make it fun, and remember: 好好学习，天天向上！*