Other than staring out at the vast emptiness that comprises most of the province, the main ‘thing to do’ in Qinghai is to visit Qinghai Lake. More pleasingly known by it’s Mongolian name, Kokonur, the lake is China’s largest – a salty expanse four times the size of Hong Kong.

While Qinghai Lake and its shoreline are beautiful, they’ve both fallen prey to the worst element of Chinese tourism; the jingdian. A jingdian (景点 jǐngdiǎn), or scenic spot, is developed purely for daytrippers. Most commonly they take the form of a loose collection of photo spots, linked by a little bus, to be entered after buying a ticket. Doesn’t sound so bad, does it? But it still galls to see a local government (for it is they, or state-owned companies that develop and ‘own’ the jingdian) cashing in when the main attraction is just natural scenery that ought to be free for all to enjoy.

Bird Island was one of the first jingdian around Qinghai Lake, and my destination. The island (now a peninsula) is located at the crossroads of several bird migration paths across Asia and Europe. Visit today and you can ride around on the tourist bus between ‘Egg Island’, where I watched bar-headed geese waiting for their chicks to hatch, and ‘Cormorant Rock’ – a fishy smelling rock, covered with garrulous, black cormorants. It was moderately interesting, but made much more so by the journey to get there.

The most popular way to reach the island is by hiring a car and driver from Xining to drive you out and back, but I was trying to reach Bird Island by public transport, to see how it works for future guidebook readers. After an inauspicious start – I missed the minibus to the nearest town – I opted for the next closest destination, Shinaihai (difficult to say, even for Chinese people, I’m assured). The four-hour drive went roughly like this:

09:45 Depart Xining Bus Station, drive at high-speed through the city traffic
10:00 Stop for spare parts. Resume high-speed driving
10:15 Stop for fuel and cigarettes
10:30 Join highway, start to drive more conservatively (for which I was glad)
10:45 Stop for the driver to go to the loo and get a piece of paper stamped
11:30 Stop for a monk to board the bus. He sits between the driver and co-driver in the front, and promptly falls asleep on the driver’s shoulder.
12:00 A thin teal line on the horizon grows and becomes the lake
12:30 Pass a Torpedo Research Base that I photographed a few years ago – it looks much smaller than I remember
13:30 Arrive in Shinaihai 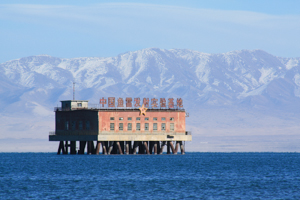 Shinaihai (population 52)* isn’t quite the transport hub I had imagined. The village has one street of small shops and restaurants that cater for a population of half-nomadic Tibetans, Hui Muslims and a miniscule number of disorientated tourists. The bus I arrived on would travel back to Xining the following day, and that was it. No more buses out of town.

Wandering around the streets, looking very noticeable and fairly lost, I attracted a follower. A burly, middle-aged Tibetan gentleman, dressed in dusty layers of black and with an array of gold teeth, he – quite rightly assuming that I wanted to leave Shinaihai – followed me around town at walking pace in his peach-coloured compact car. At various points, he cranked down a window to offer prices for taking me out to Bird Island (still sixty kilometres away), but my lack of Tibetan and his lack of Chinese hampered our discussions.

I was standing on the main road to Bird Island, trying to bargain with this driver and half-heartedly hitching, when another car stopped. Running up to them, I asked the startled family if they were going to Bird Island, heard them say yes, and jumped in the car. It was only hours later that I realised that at no point did I ask if I could please have a ride with them. Very kindly, they didn’t say anything and drove quietly on.

Bird Island was reached and visited, geese duly photographed, tourist bus duly ridden. I walked the few kilometres back from Cormorant Rock by myself, listening to lark song and scaring up rabbits (well, a rabbit), and then sat eating creamy yak yogurt in a blustery car park full of gulls (a moment redolent of seaside holidays as a child), contemplating the journey on to Golmud.

One response to “To Bird Island”