Like many British people, I come from a family of tea-drinkers – black tea with milk, please, served after meals or with biscuits and cake. In the past, I’ve tended to see drinking tea as an excuse for eating biscuits and cake, but I’m slowly starting to appreciate a nice cup of tea in its own right…

When I first went to China I got used to drinking tea with meals, enjoying the way that the hot, bitter liquid cut through the delicious grease of the dishes at the cheap restaurants my friends and I visited. In most restaurants in China, a teapot or cup of tea arrives on your table unasked for – much as with hotel wifi, it’s only in the fancier places that you have to pay for it. I drank whatever we were served – mostly low-end green or jasmine tea – and didn’t pay attention to the flavour until I was taken to a teahouse in Beijing.

In teahouses throughout China you can watch your tea being prepared and poured. In some places this might involve something fun and showy, like staff jetting steaming tea into your cup from a pot with a two-foot long spout, while elsewhere it’s taken much more seriously. As we were in one of the serious places, our tea lady spent time delicately washing the pot, washing the tea leaves, and swilling everything down with masses of hot water. It was interesting as an experience, but it was only when we tasted the tea that the point of all that washing became clear. 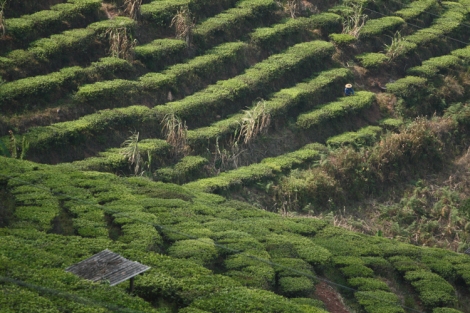 Our green tea was served in two cups, one short squat one, containing the liquid, and one tall narrow one, which was upended into the shorter cup. We were instructed to lift the tall, narrow cup out and to inhale the steam captured inside it as we rolled the cup between our palms. Even a decade on I remember how appealing it smelled – bright, sharp and fresh. Then, using the shorter tasting cup we finally sipped the clear, fragrant, wholesome-tasting tea. By the time we’d reached the second infusion of the leaves, typically the best expression of a tea’s flavours, I had acquired this particular acquired taste – the secret for me was to have it prepared properly and to drink it slowly.

I’m no expert, but I believe that many people don’t initially enjoy green tea because if the delicate leaves are brewed with boiling water they start to release bitter-tasting compounds and to lose their fragrance. If you haven’t had your own Damasteane conversion (sorry, couldn’t resist), try using cooler water (somewhere from 60-80°C/140-176°F), or visiting a teahouse or a proper tea shop – in most places you can try before you buy, and learn how to get the best out of your tea. Finally, don’t stop at green tea – how about a smoky, earthy Pu’er tea, or a delicate Yunnanese red tea? I promise, they all go just as well with a chocolate Hob-nob as a mug of PG Tips does – and on that front, dear readers, I am an expert…

P.P.S. For wonderful tales of adventures and tea, visit Jeff Fuchs’ Tea and Mountain Journals, and check out his tea club, Jalam Teas if you’re looking for some of the good stuff.

2 responses to “Teatime in China”