Tibetan roads come in two flavours, plateau-straight and mountain-ripple. While plateau roads make for easy driving and quick progress, my heart belongs to the mountain roads that curve across the ribs and sinews of the Himalayas and its satellite ranges. 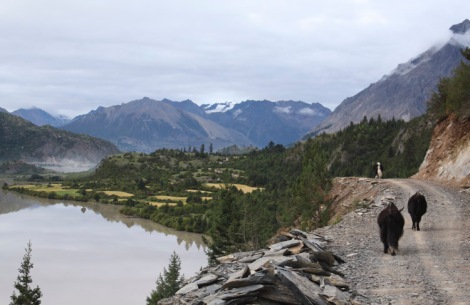 A few years ago I spent two weeks driving a gentleman with vertigo across the mountains that line Tibet’s western border. By the time we reached Chartreng on our second day in the mountains, he’d had enough of screwing his eyes shut whenever the roadside drops got too steep, announcing “It’s time for the tranquilisers!” Thereafter, xanax-assisted, he was able to relax a little, occasionally even warily opening an eye whenever our exclamations over the scenery grew too enthusiastic to ignore. This post is for you, Bruce.

Um, I guess we’ll wait? Near Tangmi, Tibet © Jo James
The main road between Chengdu and Lhasa is the G318 national highway. On its 5,476-kilometre course from Shanghai to the Nepali border the road ranges from multi-lane freeway to this, the Tongmai Tianxian. For 30 kilometres near the town of Tongmai, the G318 is reduced to a single muddy lane that runs through damp cloud forest, with a friable, landslide-prone cliff on one side, the churning waters of the Yarlung Tsangpo River on the other.

The first time I drove along the Tongmai Tianxian I was so preoccupied swerving around overloaded trucks stuck in the glue-like mud of the road surface that I failed to realise just how scary the road really was. On my second trip – my first as a passenger – I clung wide-eyed to my seat, occasionally daring to take shaky photographs before emerging on the far side in a bubble of euphoria at the experience.

The seventy-two (I’ve counted them) hairpin bends of the Yela Shan Pass drop dizzyingly from 4,600m (15,000ft) at the pass to just 2,700m (8,850ft) when the road finally straightens out to run alongside the Salween River. This road is best viewed from a distance – sit on the hill opposite and trace the puffs of dust that follow each vehicle as they weave their way down to the glittering, chocolate ribbon of the river below.

And not a tank in sight! © Jo James
The S304 is a pretty little shortcut in a land of long roads – an unsealed provincial road that runs between Shigatse and Lake Nam-tso. It runs across a thick slice of rural Tibet; visit in May and watch the fields being ploughed, visit in September and scrump fresh peas, visit in November and hope you don’t get snowed in… As a bonus, one of the valleys shown above is occasionally used by the People’s Liberation Army for high-altitude military exercises – not your everyday sightseeing.

I spent a night in a village on this road in 2011, one of the rare times I’ve managed to get ‘off the grid’ in Tibet. Usually foreigners need to register at each and every hotel, but we were far from the nearest police station and so my guide and I ate dumplings, drank butter tea and completely ignored Chinese officialdom for a night.

4. The Road to Yunnan

Hanging out at the Dongdha Pass © Jo James

The upper reaches of the Mekong River © Jo James

As you drive from Lhasa to Kunming, you ride over high, high passes (the Dongdha Pass shown above tops out at 5,100 metres or 16,728 feet), bowl along bucolic valleys and cross countryside that has been catnip to intrepid travellers for centuries. In the early twentieth century, plant-hunters Joseph Rock and Frank Kingdon Ward trudged through these valleys looking for new species and tenacious missionaries built village churches that are still in use today…

5. The Everest North Base Camp Road

Worth getting up for? Pang-la at dawn © Jo James 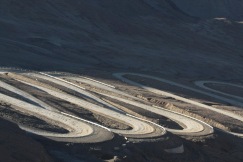 Almost the end of the road, Rongbuk Monastery © Jo James

Well, something had to go last… In what must be the access road to end all access roads, Mount Everest’s North Base Camp lies at the end of a hundred kilometres of gravel road. Get up early enough and you can be at Pang-la Pass in time to see dawn break across five of the world’s fourteen 8000-metre peaks – a sight that leaves me hopping up and down with excitement every time I see it (four times, and I’m still hopping). Keep going straight on and you’ll find yourself jolting down the last few kilometres with Everest’s north face looming mesmerisingly ahead…