When Wayne pulled up on his motorbike and asked me where I was going, I’m afraid I sighed inwardly, in anticipation of the conversation ahead. Like most independent travellers, I am used to dealing with people touting for my custom – but that doesn’t mean I’m always able to do so gracefully. 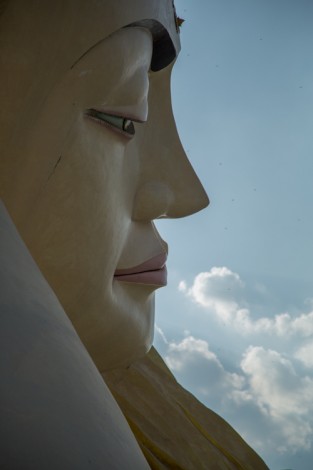 When I arrived in Bago earlier that afternoon – the sole foreigner on the slow bus from Yangon – I attracted a cluster of hotel touts. Flustered, I headed straight to the hotel I’d spotted from the bus, one that wasn’t represented in the crowd. “You really ought to come to my hotel”, said one of the gentlemen reproachfully, as I made to walk off, “it’s the best in town.” I smiled weakly at him, and went on my way, only to discover when I visited his guesthouse a few days later that he was actually quite right.

Bago is a quiet, leafy town messily bisected by the clamour and dust of the Yangon-Mandalay Highway, with trucks thundering straight through the town’s centre. While it seems like an unimportant place today, the town has a long history – Buddha himself predicted the city’s foundation when he dropped in on a tour of South-East Asia. Bago was a regional capital and a major Indian Ocean trade centre until the eighteenth century, when the capricious Ayeyarwaddy River changed course and cut it off from the sea. The city was instantly transformed into a backwater dotted with gold-coated palaces and pagodas, suggestions of its glorious past. 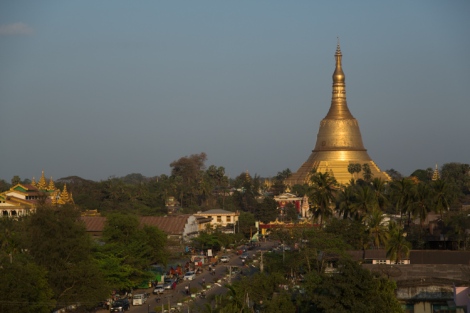 I hired a bike from my guesthouse (the second worst in Bago, as it turned out) and cycled off into the afternoon to explore. In a few hours I managed to check one monastery, two reclining buddhas, four pagodas and several watermelon stalls off my list, such was the density of sights and watermelon vendors.

However, my problem was that I didn’t understand much of what I was looking at. One monastery was filled with ancient stone tablets and intriguing murals, but the young monks – engaged in building a new well, their robes hitched up around their hips – didn’t speak English, and the closest my phrasebook came to being useful was offering the Burmese for “I’d like to meet the abbot.” 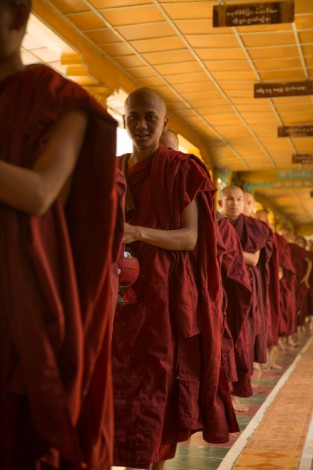 I took photos and cycled back to Bago, two girls riding alongside me part of the way in silence, shyly returning my smiles. Others were less reticent, calling out “Hello!”, “Where are you going?” and once, memorably, “Bye bye mummy!”

When Wayne drove up I was steeling my nerve at the edge of the main road, waiting for a chance to cross. Once we had established that I wasn’t going anywhere in particular, and that he was a tour guide, he asked “Have you tried htamené? It’s a kind of sticky rice, very difficult to make…” Famished, my resistance ebbed at the mention of sticky rice, and I decided that I would join Wayne on a htamené hunt, with a view to asking him to take me on a tour of Bago the next day if it seemed that he would be able to help answer my questions. 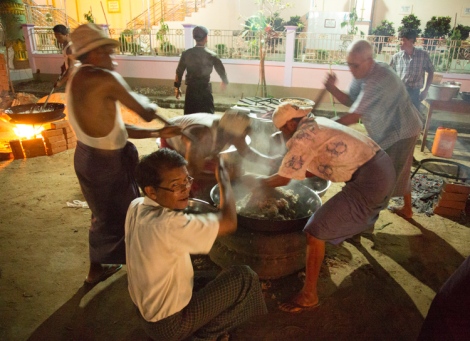 This is htamene, Bago © Jo James

Shortly after, Wayne managed to procure us free samples of htamené, a tasty-but-greasy festival dish made by pounding rice and sesame seeds together under a full moon. As we detoured back to my hotel to avoid the traffic police – neither of us were wearing helmets – Wayne shouted out a commentary that reached me in snatches on the wind: “The moat! No water, just weeds and rubbish now, ha ha!!” “Millionaire Teahouse! Very good samosa!” and so on. We arranged to meet the following morning.

Early the next day, Wayne and I began to shuttle from pagoda to hotel to bus station to pagoda. He pointed out where to get the cheapest bus tickets, which hotels had just opened, which businesses were owned by government cronies and explained what all those murals actually meant.

Our pace mercifully slowed after lunch. Stuffed with curry and rice, tea, jaggery, and a partially solid chocolate bar that Wayne had produced from his bumbag, we visited a cheroot factory. As I cooed over a baby contentedly clutching and unclutching its tiny fists in a cradle made from a longyi suspended from the rafters, Wayne made the pretty thanaka-daubed cheroot rollers hoot with laughter with his jokes. “You see?” he asked, as we made to drive off, “Ladykiller!”. 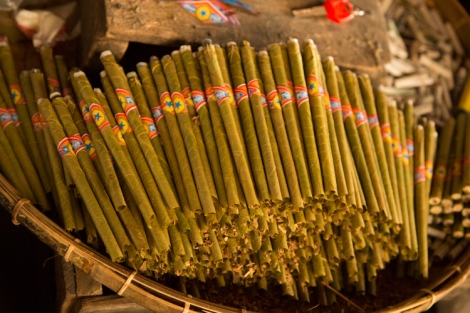 Wayne had further opportunity to burnish his ladykiller image at our next stop, Bago’s Snake Monastery. The story behind the Monastery’s foundation is a curious one. Sometime in the 1990s, a gentleman in Hsipaw, hundreds of kilometres from Bago, dreamt that his daughter had been reincarnated as a python in Bago. He came to Bago, found the snake/daughter, became a monk and raised enough money to build the monastery. Father and daughter are still alive and well – the snake has grown into an unusually fine, fat specimen, and the monastery displays pictures of the elderly monk with his serpentine daughter draped about his shoulders, a tender expression on his face. 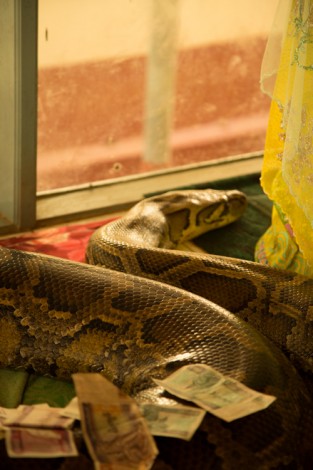 My, what a beautiful daughter you have! © Jo James

While I looked around the monastery, dutifully taking notes and photos, Wayne had efficiently located a group of high school girls and proceeded to chat them up. It was Valentine’s Day, and he pleaded the prettiest of them, a lovely half-Chinese girl, to be his Valentine, then bought her and her friends a bag of sugarcane juice each and showed off his motorbike. I made rather a poor wingman, and pulled disapproving faces until Wayne finally agreed to move on just as the object of his affections started to look interested.

Well after dusk, as I bid Wayne farewell outside Bago’s second worst guesthouse, I asked if I could include his contact details in my account of Bago. “Why not?” he replied, which I judged to be consent, “But I don’t have a mobile phone, or an e-mail address.” “How can people find you then?” I asked. “I’ll find them! Like I found you!” 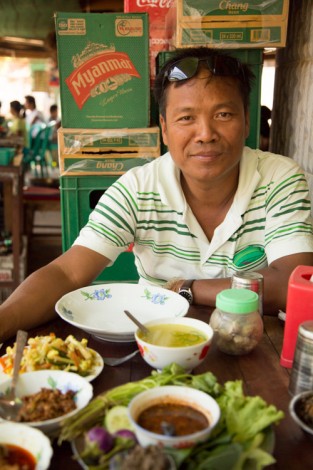 This will sound strange, coming from an erstwhile tour guide, but I’ve always classed the hiring local guides as an unnecessary expense when travelling by myself – surely the point of independent travel is being independent? Wayne, and all the other excellent, eccentric gentlemen (no ladies, yet) who I’ve worked with on this trip have conspired to change my mind. Between them they have made my journey far more interesting and amusing, not to say immeasurably easier than it would have otherwise been.

I’ve been compiling a mental list of ‘Rules for Travel’ on this trip. Wayne inspired the first: Guides are (mostly) great.

P.S. ‘Wayne’ is not Wayne’s real name – I misheard him when he first introduced himself and, taking him to be a fan of Wayne Rooney, called him Wayne throughout our jaunt together. I’ve decided to stick with his accidental pseudonym here.

2 responses to “The Ladykiller”