Burma has a dog problem – hundreds and thousands of strays. I’d read about ‘pariah dogs’ in colonial-era books on the country, but didn’t realise how ubiquitous they are until I visited myself.

There are a few stray dogs on Cheung Chau in Hong Kong, where I live. They’re usually fairly meek things, silently slinking into the undergrowth when you happen upon them – unless you have a dog with you. Burmese strays are far more exciting to deal with and I had plenty of opportunities to test my amateur theories on pack psychology, the result of a minor addiction to The Dog Whisperer with Cesar Milan. 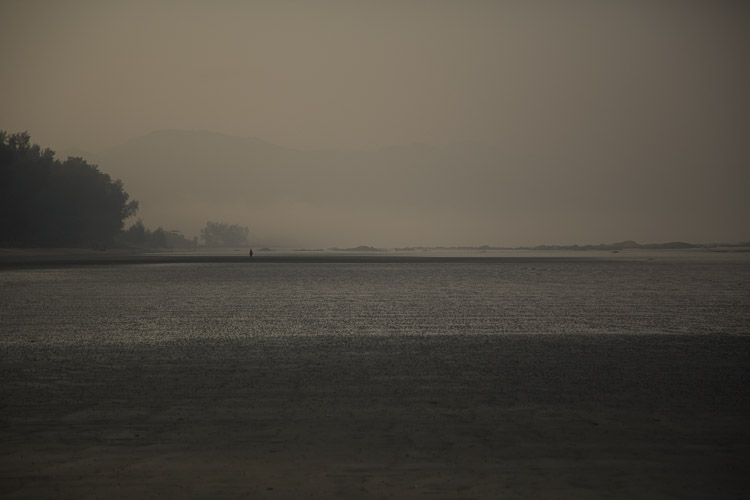 Three weeks into my trip, I spent a few days at a guesthouse near Maungmagan Beach near Dawei in Myanmar’s far south – my flat-out favourite place on the entire trip. Early one morning, I set out for a walk along the beach, a thin mist diffusing the sunlight, the air veiling the coastal hills like a curtain of gauzy chiffon – a kind of light I came to think of as uniquely Burmese. One of the guesthouse dogs trotted along behind me, sniffing bushes and cocking his leg over the piles of rocks that lined the road. 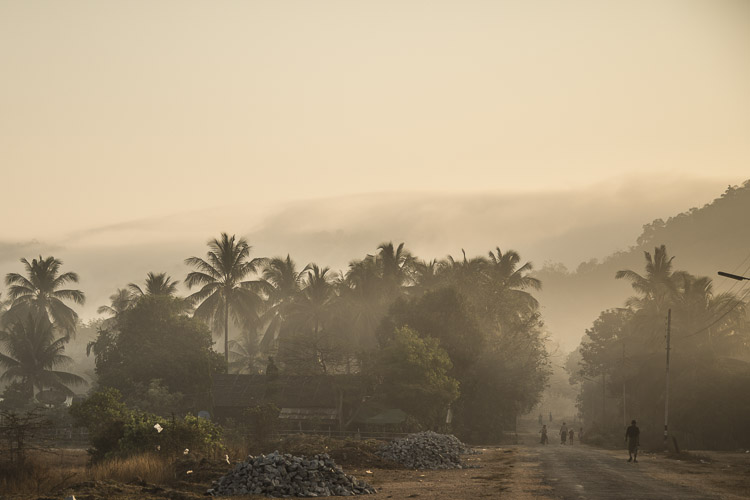 As the two of us approached the beach, we came across a pack of six strays. Their ears pricked and they unloosed a volley of barks as soon as they saw the guesthouse dog, a familiar stranger. I walked around the group in a wide semi-circle, but the guesthouse dog braced himself and stood where he was. I’d never understood what it meant to ‘raise one’s hackles’ until then. The dog’s head went down, his back arched sharply up in one hyena-esque movement. His lips drew back into a snarl. The dogs skirmished violently and briefly, six on one, with the guesthouse dog acquitting himself bravely and well as I kept on walking and hoping that my companion would abandon the fight and run back to the guesthouse.

The scuffle settled down, resolved by some ancient canine law, and the guesthouse dog came jogging after me. We continued down the beach as I talked at him and he desultorily hunted the crabs whose casts polka-dotted the beach. A few hundred metres further on the fight was repeated with a fresh pack of dogs. Once again I walked on, hoping this time that the dog would follow me rather than stopping and fighting. He eventually broke away with a yelp and limped after me.

After the third fight – in which my buddy was left bleeding as I finally joined his cause, yelling and hurling my flip-flops vaguely in the direction of his attackers – I abandoned my walk. We turned back towards the guesthouse and walked past all his earlier aggressors, my guardian and I working together to scare them away as he got too tired to do it alone. Eventually, we reached the guesthouse and the dog retired to a shady spot to lick his wounds.

Later that day I told the story of our walk to the guesthouse owner, a Burmese Halle Berry-lookalike, Zinmar. “Oh, he’s always doing that! Every day he goes walking with the guests and comes back covered with bite marks, so I have to clean them and give him antibiotics. Crazy dog! He thinks he has to keep you all safe here!”

The nameless guesthouse dog might have a point, given how many times I subsequently had to dissuade packs of dogs from biting me. I tried barking like a madwoman, standing my ground, throwing rocks and simply ignoring them as they snapped at my heels, all with mixed success. Dog-wary travellers, consider giving rural Myanmar a wide berth.

Towards the end of my trip I spent a day exploring the bone-dry husk of a seventh century city near the town of Shwebo. My man-on-a-motorbike in Shwebo, Kyaw Soe (pronounced Chor So), and I had been gyrating along rocky tracks from one excavation to another all morning. Kyaw Soe, an enthusiastic detourer, was keen to ensure that my knowledge of Shwebo was as complete as possible, showing me (among other things) Shwebo’s first internet cafe (closed since 2012), an utterly non-descript reservoir where he struck poses against a tree for my camera, and a restaurant that was allegedly and emphatically “too cheap for foreigners! Too cheap!!”

Thus it was with a slight unwillingness that I arrived at site #33, the third section of city walls that we had visited that morning. I had lost my sunscreen on a more-than-usually-violent truck ride a few weeks previously, and was wearing my only long-sleeved garment (a fleece) as protections against the 40°C sunshine. As we stood on the knee-high walls we heard an oddly high-pitched animal sound. Every few seconds it would call out once, twice, but the animal remained hidden – I couldn’t tell whether it was a dog or a bird. I walked back to Kyaw Soe’s motorbike and leaned against it, vaguely waiting for whatever it was to emerge from the brush. 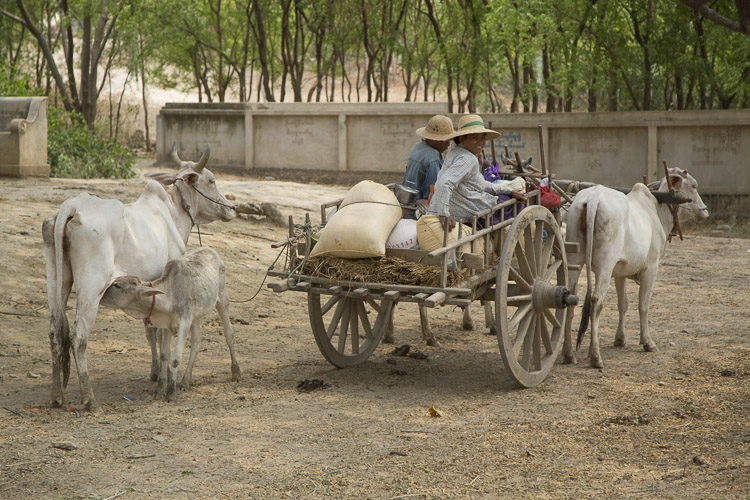 Seeing that I was bothered by the sound, Kyaw Soe took the initiative calling  “Let’s go and see what it is…” over his shoulder as he bounded towards the noise. I ran after him in time to hear him shout “It’s a dog! But it can’t move.” A small white dog, a female, was lying down amid the clumps of dry hard earth that pass for a field in Upper Burma’s dry season. We approached it slowly, worried that it might bite out of fear.

Kyaw Soe knelt down besides her and she weakly licked his hand. The dog’s hindquarters were paralysed, and she was too thirsty to raise her head more than a few inches. We gathered her into my sweaty fleece and I carried her as gently as I could back to the motorbike. I think now that someone had purposely abandoned her in the field in order to escape the bad karma that would result from killing her outright – a serious matter to Burma’s Buddhists.

We bumped back towards the site’s small museum in the hope that someone there would be able to look after her, stopping halfway to give her something to drink at one of the water jars that those same Buddhists place along the roadside for thirsty passers-by in order to earn karmic merit. She drank deeply, and the three of us climbed back on the motorbike, the dog licking my arm as I sat side-saddle and thought wildly of ways to affect an international dog adoption.

The museum guards took her in slightly unwillingly, and I left her there even more unwillingly, half fearing that she’d go straight back into another field when they discovered she was paralysed. The only person who was entirely happy about the whole episode was Kyaw Soe, after everyone who heard the story told him that we had earned some top-notch karma for rescuing the dog. Feeling naïve and rather impotent, I left a little money for the museum to look after her and looked back in tears as we drove away.

P.S. If you happen to visit Hanlin Ancient City Archaeology Museum near Shwebo, and if you happen to see a little white dog, please give her a pat on the head and maybe a few hundred kyat to the museum? Thanks! xx

Written on the slow ferry to Cheung Chau