Stick your head out the open windows of the world’s bounciest trains and perfect the art of riding motorcycles side-saddle. Rumble down quiet country roads on ancient bullock carts and chug down the Irrawaddy on stately government ferries. Welcome to the wonderful world of Burmese public transport!

We’re not talking about domestic flights and express buses here, because those are efficient but dull (I think) – not to say expensive. Instead, let’s look at more interesting ways to get around in Burma…

<< Click on each gallery to see a slideshow of images >>

Burma’s antiquated narrow-gauge rail network dates from the days of British Burma. Trains are slow and frequently delayed – at one point I arrived at a station three hours late for my train, only to discover that the train was running five hours late itself – and comically bouncy.

Although they’re best avoided if you’re on a tight schedule, Burma’s trains allow access to parts of the country where road transport is closed to foreigners. They also offer more opportunities to interact with other travellers – plus, as I discovered to my cost, they’re the only transport that still runs during Burma’s week-long Thingyan (New Year) holiday…

The ticket office in Bago Railway Station, a couple of hours outside Yangon. The small, sleepy station is a stop for most services between Yangon and Mandalay, Burma’s second city. 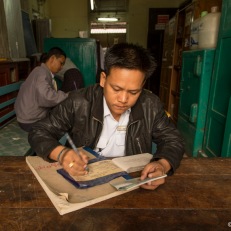 Foreign travellers are usually invited into the station office where each ticket is written out by hand and your passport details are entered into a large, dog-eared ledger – a computer-free zone, at least for the time being.

Curries are sold on the platform, served on a big mound of rice and pickles. Vendors also sway through the trains selling bags of potato crisps (“Aloo gyaw! Aloo gyaw!”) and tea-leaf salad (laphet thouq) – a Burmese pick-me-up. 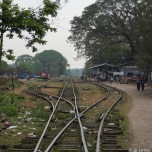 Hopin Station in Upper Burma is a typical rural station. Sadly, most of the rubbish on the train (polystyrene boxes from those delicious curries) is tossed from the open windows and left to litter the tracks.

Doors stand open between one carriage and the next. This is a view into an ordinary class carriage, where seating is on wooden benches and shutters cover the windows instead of glass. 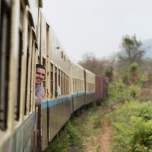 An excited traveller looks ahead to the Gokteik Viaduct – a 1901 bridge that soars 102m (335ft) above the Dokhtawady River. Trains cross at a crawl with doors and windows open, leaving passengers with plenty of time to admire the view.

A girl cleans her nails, seemingly oblivious to the drop beside her as the Lashio-Mandalay train crosses the Gokteik Viaduct.

Boat trips – on Burma’s rivers and a handful of coastal routes – are an excellent way to get around the country. From cruises on teak-lined steamers to crowded “fast boats” and ponderous government ferries (descendents of the wonderfully-named Irrawaddy Flotilla Company), there’s a boat trip to suit most travel budgets.

However you get on the water, you can expect to see a slice of the life aquatic – women lathering wriggling children for their daily bath in the Thanlwin (Salween), monks thwacking their deep red washing against rocks by the side of the Ayeryarwady (Irrawaddy), and fishermen perching hopefully on rickety bamboo platforms in the Andaman Sea…

Communities along Lower Burma’s Tanintharyi Coast are sustained by fishing – beaches that elsewhere would draw crowds of holidaymakers are here covered with nets for drying the day’s catch. 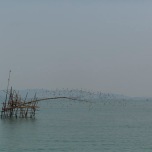 Seabirds take flight from a fishing platform somewhere in the Myeik Archipelago, scared up by the sound of our ferry’s engine. 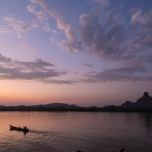 A boat heads downstream on the Thanlwin River near Hpa’an. A thick seam of limestone runs through the countryside here, with rocky outcrops adding drama to the otherwise flat landscape. 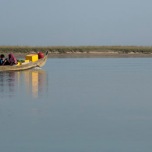 In the dry season, flat sandbanks in the middle of the Thanlwin dry out and grow grassy tops, turning into seasonal islands. 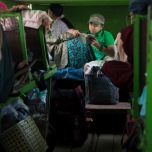 A boy sits and reads amongst the piles of luggage that fill one of the fast boats down the Ayeyarwady from Katha to Mandalay.

Three young monks lounge aboard a longtail boat on the Ayeyarwady, as the river slides by.

Crowds of trucks and motorbikes wait to board the vehicle ferry across the Ayeyarwady. With a handful of bridges spanning the long river, services like this one are vital for riverside communities.

A boatful of military daytrippers scoots out to Shwe Myitzu Pagoda on an island in Myanmar’s largest lake, Indawgyi Lake.

Private cars are still a rarity in Burma. Most people rely on two-wheelers – either bicycles, motorbikes or tuk-tuks – to get about. I spent a lot of time riding around on motorcycle taxis, and learnt to sit side-saddle, as Burmese women do, with my legs hanging down on the opposite side to the exhaust pipe, flip-flops dangling inches off the road surface. 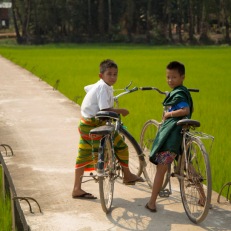 Two boys stop for a photo with their bikes against a vivid backdrop of rice fields outside Hpa’an in Kayin State.

Toddy palms line a road outside Mawlamyaine in Lower Burma. 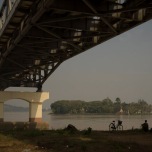 A man sits in shade under the big Thanlwin Bridge in Mawlamyaine. The tiny mid-river island is Gaung Say Kyun or “Shampoo Island”, formerly the source of water for the King’s annual (!) hairwashing ceremony. 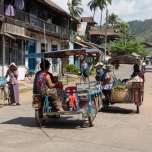 Motorcyclists approach on a long and bumpy road (I was on a bicycle) near Indawgyi Lake.

Motorbikes piled high with goods (and people) are a common feature on Burma’s roads.

U Bathein poses with his motorcycle in Pyin Oo Lwin. An antique dealer by trade, U Bathein moonlights as a motorcycle taxi driver. Pyin Oo Lwin was once the summer capital of British Burma, and the bedraggled graveyard in the background is the final resting place for settlers who died here.

Monks push their motorbike past U Sein Win and his bicycle on a seasonal bridge outside Bhamo. Spanning one of the Ayeyarwady’s tributaries, this bridge is swept away by rainy season floods. Villagers rebuild it when the floods subside each year, and charge a small toll for using it. (I wonder if monks are exempt?)

Refuelling by the roadside in Kachin State.

A rural gas station in Upper Burma sells gasoline in half-litre plastic bottles by the roadside.

Even the more formal gas stations feature hand pumps and simple barrels, like this one outside Myawaddy in Kayin State.

Buffalo carts and elephants. Those are your options in the four-legged transport category 🙂 . Buffalo carts are Burma’s original form of wheeled-transport, and they’re still used widely in the countryside. Asian elephants work mainly in Upper Burma’s logging camps, as they have for a century or more since the British started pulling old-growth teak from Burma’s magnificent forests. Neither is really a practical transport option for the casual visitor, to be honest, but they’re very picturesque nonetheless – I was particularly enchanted to meet these elephants on an otherwise empty road near Katha…

Elephants returning home at the end of a hard dry-season day near Katha in Sagaing Region.

A cow cools off under a tree near Shwebo.

A man rests his bullocks (pardon?) by the side of Bilu Kyun’s only sealed road.

Finally, if you’ve exhausted all other options, shanks’ pony is always available – and you don’t even need to go barefoot, like the monks do.

Monks take their alms bowls and make an early morning procession in Bago. 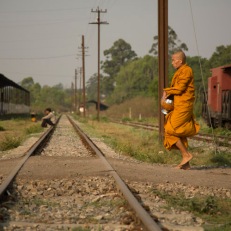 P.S. Want to experience the glories of Burmese public transport in just 47 seconds? Check out this video, compiled of wobbly, unfocused clips I recorded on my trip:

6 responses to “Great Ways to Get Around Burma”