Mrs Lu still wears a traditional topknot, which she winds up on top of her head in elaborate loops. “I never wear a hat, like some of the other women do,” she told me, “my head just never seems to get cold.” I have never seen her or any other Dong lady do her hair in the morning, so it seems as though it’s permanently wrapped up neatly, through day and night.

She is very hospitable (a Dong tradition in itself) and still farms and looks after her mother. But in many other ways Mrs Lu is not traditional at all. She went to Guangzhou in the late 1980s to work for a year, and that experience made an indelible mark on her. Born in Zhaoxing, Guizhou in 1970, she was nineteen the year she went to Guangdong, and – at the time – able only to speak Dong dialect. Through connections with other Dong in Guangzhou, she managed to find a job in a garment factory, whirring identical pieces through a sewing machine. “Nobody thought I could speak – I didn’t dare to say anything in my bad Mandarin. But then one day, after a few weeks, the needle on my sewing machine broke, so I had to put up my hand”, she breaks into a smile, “and my boss came over. I pointed at the needle and told him that it was broken. He was so surprised that his eyes grew big and round and he started laughing!” 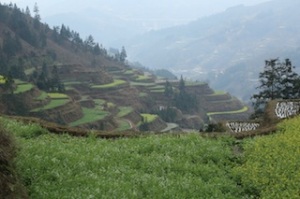 Today, Mrs Lu is tall for a Dong lady, but when she went to Guangzhou she was the shortest in her family. She thinks that it was the change of diet that gave her a growth spurt in her early twenties. With a small family field, her parents were only able to provide enough food to feed their five children for eight months of the year. For the remaining four months, her father had to go around their friends and neighbours and borrow spare grain wherever he could. The land around Zhaoxing only provides one crop of rice a year, planted in April, harvested in September. By living away from home, Mrs Lu could save some of the burden on her parents’ food supply, as well as earning extra money to send home.

Her wages at the time were ¥7 a day. Like most factory workers then – and now – she lived in a factory dormitory, so the only expense she had was her food, which was ¥2 each day. “It was heart-breaking to have to spend so much of my money on my own food,” she says, “but everything in Guangzhou was so expensive – thirty years ahead of the village.”

“My little sister died when I was in Guangzhou, so I came back home. My mother still cries when we mention her name. At that time there was no hospital in Zhaoxing, just an old man with a medical bag, so when my sister told my mother that she didn’t have any energy to help on the farm, my mother just told her to eat some more and sleep earlier. By the time my parents called the doctor and his bag, it was too late and she died just a few days after falling sick. I came back to the village then, to be with my mother and father.” She takes a sip of milky instant coffee, which she drinks every morning – and gazes at the steam whirling up from the plastic beaker.

“I decided to start selling clothes, so my eldest sister went with me to Liuzhou and we bought some stock. Then we came back to Zhaoxing and set up shop on the main street, with the clothes spread out on a sheet on the ground. We used to travel from one village to the next by hitching rides on tractors and horse carts, and sold the clothes wherever we could get to.” This memory is happier than the last and her smile returns.

Today, Mrs Lu and her husband Mr Lu (she hasn’t changed her name – both Mr and Mrs Lu belong to the ninety per cent of the population in Zhaoxing share the same family name – but as they come from different clans, marriage is accepted) run a small hotel with twelve rooms, as well as a restaurant and a farm where they grow many of the vegetables that they use in the restaurant. Any one of those businesses would seem to be a full-time job, especially without any outside help, but the Lu’s seem to manage it well, seldom arguing or shouting at each other.

Mr Lu’s father is in his eighties, but he helps with the food preparation (which, from what I saw, meant cleaning mountains of spring onions outside the hotel each morning) and tidying things away. Their two eldest daughters, aged seventeen and thirteen, work as waitresses in the restaurant, snatching moments in front of the enormous television to follow their favourite soap opera (a colourful Tang dynasty saga at the time of writing) whenever they can. Mrs Lu gets up early, cleans the rooms, drinks her coffee, and prepares ingredients for the day’s meals, helped by Mr Lu. When people come into the restaurant, Mrs Lu will prepare their food – the commis chef, while Mr Lu presides over the stovetop, wearing a floppy, white chef’s hat that he was given during his two months at cooking school in Guiyang. Farming is squeezed in whenever they have time. Their youngest daughter, aged seven, is the only person in the family without a specific job. She’s still a carefree little girl, dancing around the yard outside the hotel and petting the family cat as it curls up around the embers that warm the family’s small table in the restaurant.

Mr Lu started the hotel – he went to school and can read and write well, and it is his name that decorates the many certificates and permits that hang behind the reception counter. Mrs Lu is illiterate, like many Dong women, who in the past have tended to leave school when they’re young. “I could see my parents working so hard to take care of us all, and I wanted to help them. So I left school when I was twelve to look after our cattle and sheep. I would wander all over the hillsides with them, walking for miles. Sometimes, we would wander so far during the day that we would end up on top of Qilinshan and have to walk miles to get home. For that whole year I worked hard, but because I was a year under the official working age, the commune wouldn’t give us any work points for anything I did. I got so strong, I could lift a hundred jin [fifty kilograms] – like a man!” Some guests come into the hotel looking for a room and a meal. Mrs Lu abandons her coffee and the busy part of her day begins.