I’ve never had my bags inspected as much as I have in Xinjiang. Each bus and train station has a luggage scanner and a body scanner, and you need generally need to go through both just to buy tickets. Some hotels and markets have the same set-up, and all hotels as well as many shops and restaurants have signs requesting that patrons “Open Bags for Security Check”.

Driving from Qinghai into Xinjiang passengers were asked to leave the bus at two separate points to produce ID cards (or passports) in a small police hut. At the first stop I filed off with everyone else, but when we came to the second, the bus driver motioned for me to stay in my bunk. I understood why a fraction of a second later, when I heard one of the officers bark out harshly, “Why don’t you have your ID card with you? Why?!” I stayed put, shielded by the vehicle’s tinted windows, the better to avoid questions over what I was doing travelling through a region that bristles with military bases and strategic oilfields. 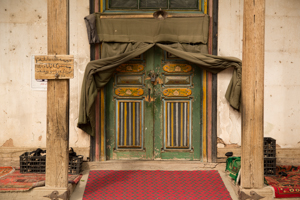 This pattern of checkpoints has continued throughout the Xinjiang Uyghur Autonomous Region, with a few variations – sometimes the bus driver has walked along the aisle selecting people to have their ID scanned (always choosing men, 80% of which are Muslim Uyghurs), occasionally we have given our ID to the drivers for the duration of the journey. Regardless, it’s clear that someone is trying to give the impression that our movements are being watched very closely. As with many experiences of Chinese bureaucracy, I’m not convinced that the general surveillance is done that rigorously – I’ve certainly seen enough guards asleep at their posts – although I’m sure that actual suspects are watched very closely indeed.

One of the more amusing brushes I’ve had with the police here is when I was out hunting for silkworms near the village of Jiya near Khotan. The region between Khotan and Kashgar are home to China’s largest concentration of Uyghurs, and are seen as a hotbed of Uyghur separatism – 21 people were killed here in a clash in April – so tension runs higher than elsewhere in Xinjiang. Jiya is home to Khotan’s silk industry, and there are supposed to be cool, shady sheds full of silkworms munching on mulberry leaves out there somewhere. I had gotten off the bus too late and was walking back down the quiet poplar-lined lane by myself when a young man started walking alongside me. We had a pleasant but mutually unintelligible conversation – something about his car, accompanied with lots of smiles and shrugging – when a black Toyota drove past, then stopped and reversed back to where we stood. A short Han Chinese policeman got out.
“What are you doing here?”
“Looking for silk factories.”
“What about him? Can you understand what he’s saying?”
“No, not really.”
“Get in the car.” 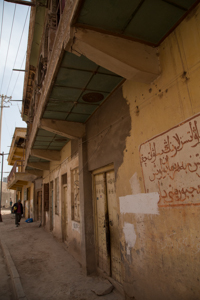 For a second, I thought about resisting – being ordered around never fails to irk me and I wasn’t doing anything that warranted being picked up – but I had a long way to walk back, so I got in the car and waved goodbye to my young friend – happily the policeman didn’t seem too interested in hassling him further. As we drove back down the road the policeman continued his line of questioning.
“Are you a reporter?”
“Umm, no. I’m just a… a traveller.”
“You should take more care around here by yourself. It’s dangerous.”
To his companions (a lady and a man, neither of whom were in uniform – I felt that I’d gatecrashed their day out in the country) he said “We’ve got to look out for foreigners. Who knows what might happen otherwise!” Nods all around.

We drove back towards one of the workshops that I’d seen on the drive out from Khotan, Atlas Silk. We parked outside, and all went into the showroom. I was genuinely keen to get a scarf to cover my hair (Khotan is quite a conservative city, Islam-wise), but I hammed it up a bit, looking at this one, trying on that one, hoping to bore them into leaving, but they started to shop as well. The policeman got rather excited at one point by a very natty suit of blue, green and white atalas silk, but sadly decided against trying it on – photographs of that would have been pure gold… 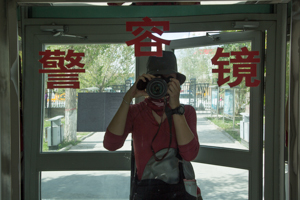 Xinjiang is in a similar state of limbo to Tibet – the Chinese government badly wants Xinjiang to be part of China, and the many Uyghurs badly want their own independent state. As with Tibet’s situation, it’s difficult to see a positive road ahead, one whereby the local people will attain any genuine autonomy and influence in their home region. And much as the security checks might be inconvenient for me and other visitors, for people living in the region they add to a litany of aggravations, both petty and important, that they must deal with on a regular basis. Not for the first time, I find myself wishing that the Chinese government could be more sympathetic and humane in its approach to a situation. In this region at least the Chinese government’s promise, to “serve the people”, seems less and less apposite.

P.S. The Economist recently published an interesting article about Xinjiang and military settlements throughout in the region – check it out here.

One response to “A State of Suspicion”