China ebbs away as you travel west through Xinjiang, until at some point you discover yourself on a dusty street in Kashgar, roast lamb scenting the air and the Muezzin’s call to prayer giving you goosebumps. We’re clearly not in Beijing any more, Toto, apart from the dust, that is…

When I left for Xinjiang earlier this summer I found myself uncharacteristically worried about the trip. I had had a few mildly unpleasant experiences on my first visit there as a 19-year old, and I worried that travelling in the region might have become more difficult in the intervening years of ethnic uprisings, which I’ve written about elsewhere. I was perhaps also influenced by Chinese friends, most of whom hear nothing but news reports of terrorism and Islamic extremism on their nation’s western front. “Don’t go – the people are dangerous” was common advice – often followed with “…and they smell bad too.”

Body odour is something that comes up a lot when discussing Xinjiang’s Muslim Uyghurs with Han Chinese. In one hotel I visited in Tashkurgan the Han receptionist who showed me around proudly told me “Our rooms smell nice and clean – that’s because we don’t have any Uyghurs staying here.” It might sound bad, but there is a certain truth to this. Uyghurs undeniably do smell different, perhaps due to the mutton-heavy local diet combined with soaring desert temperatures. On other fronts, however, my fears and friends’ warnings both proved ill-founded.

Despite frequent communication problems (many Uyghurs speak little or no Chinese), most people I met were kind and interesting, and I was genuinely sad to leave Xinjiang at the end of my three weeks there. On the basis of these recent experiences, I’ve decided to help Xinjiang and the Uyghurs with a bit of positive PR and some visitor education to help redress the balance. Before you venture anywhere west of Ürümqi read the following list – Uyghur culture for beginners: 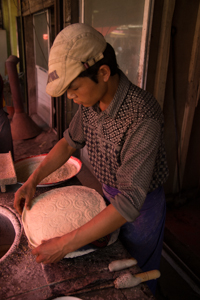 1) Waste not thy naan
Across Xinjiang you will see people carrying bags stacked high with naan on buses and trains. Naan, the flatbread that is the region’s staple food, is treated with utmost respect by Uyghurs, as it is across Central Asia. At each meal, the most senior person present breaks each bread in half and half again. Then you tear off a bit that fits in your mouth – no ripping a mouthful off with your teeth. Uyghurs never eat naan while walking, or even step on the crumbs, and they certainly never waste it.

Uyghurs actually frown upon wasting any kind of food – something that the rest of China is slowly learning from. At each meal only a few dishes are ordered, with more added if necessary. And those big bags of naan? They’re presented as gifts to a host – even Ürümqi airport sells naan gift bags – and not intended for hungry travellers, as I had previously assumed. 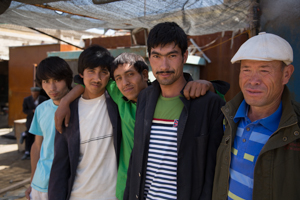 2) Moustaches are marvellous, but beards are better
Is facial hair enjoying a ‘moment’ wherever you are? Uyghur men seem to be big fans of the ‘chevron’ and it took me a long time to discover why. In Islam, growing one’s beard and trimming the moustache is one of the sunnah, a rule of how good Muslims ought to live, as laid out in the Qu’ran. But in Xinjiang the Chinese government has effectively banned younger men from growing beards – you’re not allowed to take a photo for your all-important ID card or any other public document until you’ve shaved your beard off, and if you grow one in the interim between photos the Public Security Bureau will make life difficult for you (checking your documents, searching your car extra thoroughly, and so on) until you’ve shaved it off again. So, you grow a moustache instead… I met a young Shanghainese man with a full beard, and he said that it had been a brilliant way to form relationships with his neighbours in Kashgar – beard admiration as a basis for friendship – but he had to keep asking his female colleague to help with official paperwork in case they needed photographs.

3) It’s all in the eyebrow/s
I asked a young man I met in Khotan what the Uyghur ideal of female beauty was and his number one requirement was “Eyebrow! She must have beautiful eyebrow.” I put his use of the singular down to a simple mistake, as we were talking in English, but there’s definitely something about a monobrow that appeals to the Uyghur aesthetic. In some cases ladies will even draw a line linking their brows with kohl. I’m still not sure that I understand this one, but in general, Uyghur ladies seem to spend a lot of time on grooming and are among the most glamourous ladies I’ve seen in China – with the obvious exception of Hong Kong’s tai tais. 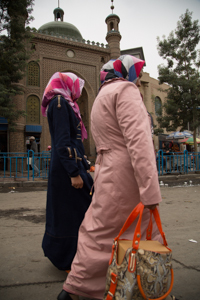 4) Modesty Matters
Dress can be a confusing issue for female travellers in Xinjiang – do you do as the Chinese girls who live there do, and dress for the weather? Short shorts and a tank top, then. Or do you do as Uyghur women do, ignore the weather and dress for modesty? In Kashgar the most conservative form of dress for women is a local type of boshiya – a full veil, in a crocheted brown fabric with no openings for the eyes – but most women just wear a headscarf and cover their shoulders and legs. I went for something in between the Chinese and the Uyghur approaches, keeping my shoulders and legs covered, but only occasionally covering my head when I was somewhere more conservative. Every time I had my headscarf on, amateurly tied as it was, strangers gave me thumbs up and I got occasional compliments about it from people on the street. My conclusion? Go for modesty even if it is sweatier, and it will be appreciated.

5) Say what?
My final tip for happy travels in Xinjiang is to learn a few words of Uyghur. I bought a ‘teach yourself Uyghur’ book aimed at Chinese migrants to Xinjiang. Among the less useful phrases for the traveller are “We care deeply about the masses’ livelihoods!” and “Strengthen development! Improve the People’s lives!” In the end, I never got as far as the political slogans section and stopped at the basics – “Hello”, “Thank you”, and “I’m a writer”. Regardless, it helped to break the ice and create some laughs as I massacred the pronunciation. How to say “Hello” in Uyghur? “Yaxshimusiz!” (or “!ياخشىمۇسىز” for all you Arabic readers out there). Now, how to say “Goodbye”?

One response to “How to say ‘Hello’ in Uyghur”