On April 1 this year, Nirwan Moktan set off to cycle from Hong Kong to his hometown in Nepal. On his 6,000-kilometre journey home, he passed through many of my favourite parts of China, from Cheung Chau on day 1 to a great, if mountainous, backcountry road in Tibet on day 91.

While Nirwan has already done a brilliant – and highly amusing – job of documenting his trip on Crazy Guy on a Bike*, I was keen to hear more about how his journey might have changed his ideas about China, and Nirwan kindly consented to be the first of my ‘travel heroes’ to guest post on Little Yak. Over to him…

I hadn’t travelled much in China before starting my bike ride home. I had basically only been to Beijing and Shanghai on business, each time flying in for just two or three days.

Before I set off, I expected China to be pretty monotonous in terms of food, landscape and people. Living in Hong Kong I had also adopted the predominant view there that most mainlanders were pretty rude, and I was also wary of how I would be treated as foreigner, especially given that I have darker skin.

In the end, I was wrong on every count. I was treated with immense kindness throughout my four months in China. The food was varied, the landscape beautiful, and people interesting in all the regions I travelled through.

What surprised me the most was the kindness I received. Time and time again my meals were paid for by other diners or restaurant owners. Despite being a complete stranger, I was taken into people’s houses at a moment’s notice. I’m not sure I would so readily display the generosity I received in China.

Of all the places I went through, I wouldn’t hesitate to return to Tibet. I am still completely enamored with the place. The landscape is phenomenal and the Tibetans have a strong and unique culture and they are incredibly kind and open. Perhaps next time I’ll get a permit though…

The only place I wouldn’t go back to were some of the grim industrial areas I cycled through in the first few days in southern China, although I doubt any ‘normal’ visitors would pass through those regions unless they were doing an extended overland tour. 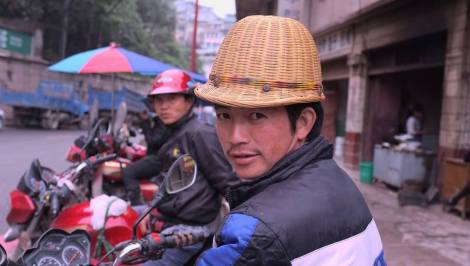 Even though I don’t speak Chinese I didn’t have much trouble getting the basics – food and shelter. What was frustrating was not being able to go a step further to hear other people’s story and telling my own. One thing that helped was a trick I learned from a friend, Rob Lilwall, who cycled around the world. I had a small piece of paper with a brief explanation of who I was and what I was doing translated into Mandarin. Although it didn’t have much practical use, the note was a way to quickly communicate what I was up to because people get curious, especially when you’re on a heavily loaded bicycle.

I cycled through China with my mouth open and although I cycled 6,000 kilometres, I didn’t lose much weight! Because of language constraints, I found the easiest thing to do was to point to any tasty looking dishes that other diners were having. Once, the very plate I pointed to was brought over and handed to me, much to the surprise of the diners.

Finally, I’ll repeat one piece of advice that other long-distance cyclists gave me before I left: Just go! If you dream of doing a long-distance journey like this, just go.

If any readers out there are travelling through Pokhara, Nirwan can now be found at the beautiful Sampada Inn, which he helps his parents to run. His bike is currently in temporary retirement.

* If you’ve never browsed the Crazy Guy on a Bike site, beware – you may end up with a chronic case of wanderlust…

One response to “Freewheeling with Nirwan Moktan”