Happy Dragon Boat Festival! A national holiday across China, Dragon Boat Festival (also known, somewhat unpronounceably, as ‘Tuen Ng Festival’ in Hong Kong) is a day devoted to racing boats, eating zongzi and drinking beer (or shopping, if you’re not so keen on the first three).

Our apartment in Cheung Chau overlooks the island’s typhoon shelter. For the last few weeks, usually under cover of darkness, we’ve been able to hear the thudding of drums across the water – the sound of dragon boat teams training. There are races all over Hong Kong today, the 5th day of the 5th month of the Chinese lunar calendar.

The most commercial races and the biggest parties are at Stanley. The fastest boats are over in Aberdeen (or so a drunken dragon-boater told me last night). By comparison Cheung Chau’s races are small and modest, but there’s a charming low-level chaos surrounding the proceedings. One crew T-boned the big ferry in slow-motion, a rubbish barge meandered across the course mid-race, hypnotic drumbeats could be heard across the island, black kites swooped after zongzi, offerings were tossed to the waves, teams with names like “The Fisherman’s Friends” competed for shiny trophies and everyone rehydrated with cold cans of Blue Girl.* And no Chinese opera to be seen (or heard) – all festivals should be like this…

Practising for next year © Jo James 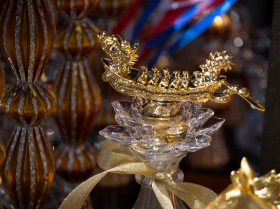 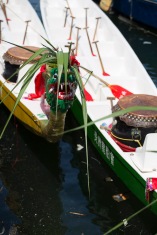 Dragon on board © Jo James 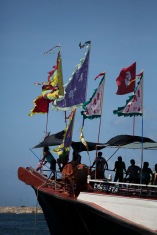 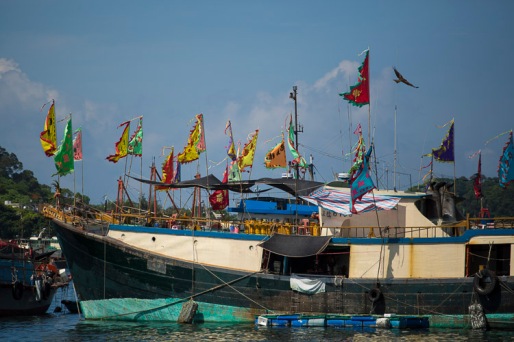 Above it all © Jo James

About Dragon Boat Festival
Like all good festivals, the precise origins of the Dragon Boat Festival are lost in the murk of time, with competing versions involving filial daughters, suicidal poets and – most fantastic of all – trustworthy politicians. The commonly accepted origin of the festival concerns a poet-politician from third century BC Hubei, Qu Yuan 屈原.

Cruelly slandered by a rival, Qu was banished from his post at the court of Chu. After years spent writing poetry in exile, in 278BC Qu learnt that his homeland had been captured by Qin, an aggressive kingdom that would later establish China’s first empire under Qin Shi Huang (he of the Terracotta Army). In despair, Qu composed his final poem (“Lament for Ying” 哀郢, click here if you fancy reading the Chinese text) and waded into the Miluo River with a rock clasped against his chest. When the local people failed to save him, they splashed the water and dropped rice balls into the river to stop fish eating the respected poet’s body – the origin of today’s splashy races and zongzi (sticky rice rolled up and steamed in bamboo leaves).

* Rival crews from outside Cheung Chau actually got into an enormous fight on their way home from last year’s races – on the upper class deck of the slow ferry, no less – the scandal! The deck’s once free-moving chairs were firmly bolted to the floor soon after, where they have stayed ever since.

Written at my desk, within sight of the starting line 🙂